The cargo cult of Jobs 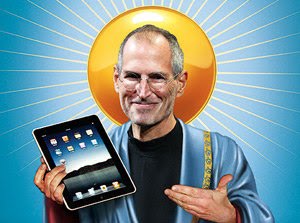 You are, probably, not Steve Jobs. A fairly safe bet if there ever was one and one that’s easy to confirm too assuming you have a mirror handy. Unfortunately, it’s seems to be more and more commonplace to see designers, CEO’s and budding entrepreneurs aspiring to what is a folk hero ideal of Mr. Jobs. He is their role model, perhaps the sum of their professional aspirations, and a symbol of the quintessential entrepreneur, designer and creative mind. I call it the cargo cult of Jobs.

And why not? After all, we are talking about a man who in many people’s eyes almost single handedly built up the worlds most successful business to date, at the very least its most valuable one. Why wouldn’t he make the perfect role model for budding entrepreneurs?

Why not? Well, for starters, it’s actually quite hard to glean any sufficiently deep insight just from the observations, quotes, and anecdotes surrounding Steve Jobs, or any folk hero for that matter, in isolation. By themselves, they are little more than scraps from the table of business knowledge. We get little true insight into the ways of things like the design and product development process that has made Apple so successful or a deep understanding of the principles that guided and ultimately made him so successful.

Another problem with idolizing folk heroes is there is typically more myth surrounding them than reality and it can be difficult separating the two. Even if that were not the case, it’s never wise to take our role models too literally. This is, after all, only one man, one example, albeit an exceptional one, but even if we could follow his exact steps we are not likely achieve even a remotely similar outcome.

Sure there are likely many insights one could in fact gain from Steve’s example and that of Apple as a business, but only if it’s understood in the context of a greater and much broader understanding of the processes that help to make businesses successful and more importantly how those processes help to ensure, or at least increase the odds of success.

Therein lies the biggest danger of the cargo cult of Steve Jobs. There is far more emulating going here on than there seems to be of real practice, learning and ultimately understanding–in this example it was actually discussed how the calligraphy course Steve took was of significant importance. It’s simply not a good idea to merely aspire to emulate some of Steve Jobs traits like, for example, his single mindedness, his practice of not asking customers what they wanted, his strong will, or even his apparently excellent penmanship. One must instead ensure they understand why these traits served him, but also how they may have, occasionally, worked against him. We are, none of us, perfect, in anything we do, designer, entrepreneur, calligrapher.

If you haven’t read it yet, I highly recommend Eric Reis’ book ‘Lean Startup’. What’s fascinating about the Lean Startup process is how much of the principles and learning it espouses appear, at least at a glance, to run completely counter to the way people often describe Steve Jobs’ management style and approach to product design. Lean Startup places a great deal of emphasis on customer validation. It suggests testing early models of a product design with real customers, in some cases possibly putting broken or extremely incomplete versions out in front of early adopters.

Apple on the other hand, is well known for not releasing something until it’s ready and Steve definitely knew how to make a big splash when it was ready. Jobs’ himself is also well known as a follower of Ford’s philosophy of very specifically not asking customers what they want, but instead having the vision to see it, build it, and make them want it.

Everyone has also probably heard of his now famous ‘reality distortion field’ and his single mindedness and focus. In contrast, Lean Startup encourages entrepreneurs to constantly challenge and break down their own reality distortion fields with regular doses of cold, hard reality through the iterative process of customer validation and validated learning.

I think it’s important to recognize though, that these contradictions don’t necessarily prove Steve wrong, no more than Apple’s massive success disproves the effectiveness of Lean Startup. I just think that truthfully very few of us really understand that well the internal product development process that went on in Jobs own mind and at Apple. It is hard to know even how much of it was truly all him or how much is just the legend and the perception of his titanic greatness. The bottom line is, you can’t compare a process to a persona any easier than you can turn that persona into a process.

When it comes to process, it’s also pretty clear that Apple’s is extremely iterative. Think back a ways and look at the history of iPod, iPhone and Macbook releases and you can see the results of an ongoing iterative process of careful incremental improvements with a sprinkling of innovation along the way. Apple is easily as Lean or Agile as any example out there, but often all that is remembered is the incredible vision, the epic launches, the huge success story, the legend.

I’ll freely admit that I don’t know a whole lot about Steve Jobs, or even really all that much about how Apple works internally. One thing I do know for certain though, is that stories of folk heroes and legends create an incredible realty distortion field of their own.

Let’s all be honest, most of us are not going to be the next Steve Jobs, nor do most of us really understand what it takes to be the next Steve Jobs, probably anymore than he did over 30 years ago. We need to make sure we are taking a broader approach to understanding entrepreneurial success and product development and not limit ourselves to learning from one folk hero’s story.

So please, don’t try to be like Steve Jobs, and when you catch yourself (mis)quoting him, say, to win a product design argument, consider for a moment if you really understand this bit of his wisdom you’re sharing or if you’re just another member of the cargo cult of Jobs.